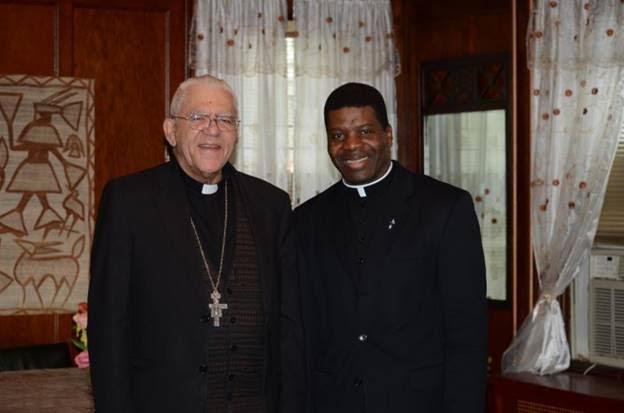 Bishop Sansaricq was born in Haiti and made his studies of philosophy and theology at the   St Paul University in Ottawa Canada. Ordained as a Catholic priest in 1960, he served as a priest in the Bahamas for 7 years then went to further study at the Gregorian University in Rome, Italy.

After three years, he graduated with a Master’s Degree in Social Studies. Bishop Sansaricq served  in the Roman Catholic Diocese of Brooklyn since 1971. Has been a naturalized American since 1994 and  Founded HAUP (The Haitian American United for Progress) , a social service agency still active in Queens, NY in the mid eighties. He was made Pastor of the Church of St Jerome in East Flatbush, Brooklyn from 2003 to 2006 and has been the auxiliary Bishop of the Diocese of Brooklyn since 2006. Bishop Sansaricq founded the Haitian Apostolate and incorporated it as a not for profit organization to extend his ministry to all the areas where Haitians immigrated. Some of his other achievements include:

–          Instituted a school of Biblical and Doctrinal formation

–          Extends his ministry to all groups regardless of language and culture.

Rev. Saint Charles Borno was born in Croix-des-Bouquets, Haiti. In 1998, he entered the Major Seminary of the Immaculate Conception – in Huntington, New York.  Rev. Borno was ordained to the Holy Priesthood of Jesus Christ on Saturday, June 5, 2004 by His Excellency, Nicholas DiMarzio, Bishop of Brooklyn. Rev. Saint Charles Borno served as a Deacon at Our Lady of Miracles in Canarsie, where he remained until June of 2008, when Bishop DiMarzio named him Pastor of St. Teresa of Avila R.C. Church in the Prospect Heights. Rev. Saint Charles Borno holds a BA in Philosophy from St. John’s University, where is currently an adjunct professor of Theology. He also earned an MDiv. and a Masters Degree in Theology, from the Seminary of the Immaculate Conception in Huntington, NY. Rev. Saint Charles Borno is very active in the Haitian and Haitian-American Catholic Communities. He was the Dean of the BE5 Deanery of the Diocese of Brooklyn. In 2015, he was named the Coordinator of Ministry to the Haitian Immigrants.

The Executive Committee of Radio Telesolidarite

Radio-Tele-Solidarite was founded in 2013 as the arm of communication of the Haitian Apostolate. Our overall objective being the evangelization of the Haitian people and while doing this the Evangelization of as many people as possible we resolved to make use of an electronic network capable of being heard all over the world.Our program will indeed consist in the first place in proclaiming the message of peace, unity and love of the Gospel. We will do it through religious instructions, prayers and multiple liturgical celebrations.The Gospel being a huge lamppost that casts light on every aspect of human life we felt necessary to utilize many different channels within the same website. There will be a main channel for the Gospel itself and all of its teachings and expressions. We will also need a channel that promotes human relationships within which family relationship will hold pride of place. The teachings of the Gospel promote harmony, respect and love in every aspect of human intercourse. We will therefore dedicate a channel to explore this important domain of reality. Culture is also an important reality in human life. It creates the environment within which the person lives. Philosophy, art in all its forms, the laws and institutions of a society are all influenced by culture. The Gospel values are called to permeate every dimension of life. The youth constitutes a human group with its own challenges and modes of expression. In order to better communicate with the youth, a specialized channel will also come to life. We commit ourselves to do all with the greatest respect for those who hold opposite views confident that we are that good always prevails over evil not through any form of violent confrontation but always through its truth and humility.